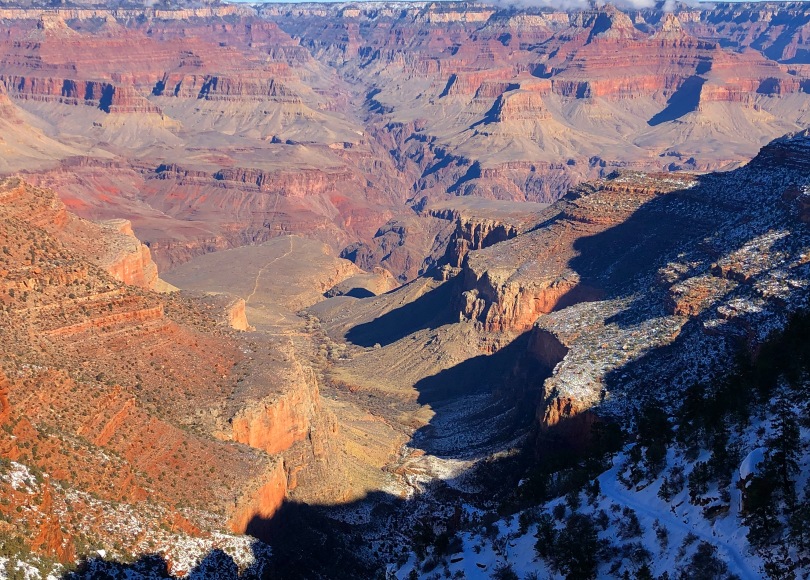 Can I Hike Rim to Rim?

Well I can’t really answer that question for you, but I can provide you with the information you’ll need to answer it for yourself.

When I first came to do this hike I found it difficult to find the information I needed to do the necessary planning to make it a success. The information was out there but is gathering it was a challenge

Grand Canyon Rim to Rim, (R2R), is a hike from the North or the South Rim to the opposite side.  As the crow flies, that’s about 10 miles.  According to the NPS however, on the hoof it’s 21 miles or 23.5 miles depending on your route. Click here for detailed distances and way-points. You’ll see different estimates of the distances, I’ve defaulted to the National Park Service data.

Some hikers take a few days to complete R2R and camp and / or lodge along the way.  To camp you’ll need a Back-Country Permit, to lodge at Phantom Ranch you’ll need a reservation. Both options will require advanced planning.  It can however be done in one continuous day hike, assuming you are both fit enough and prepared.  That is what is described here.

In essence there are 4 options connecting North Kaibab Trail with either South Kaibab Trail or Bright Angel Trail. I’ve listed the ascent here rather than the altitude change, however it is worth noting that the descent can take a toll.

How long does it take? Of course this depends on how fit you are, how fast you walk, and how often you stop. Each time I’ve completed the hike the time has been somewhere between 9 hours and 11 hours. The 9 hour time was a North to South hike. I wasn’t aiming to break any records but I wasn’t hanging around much either.

Should I train for R2R? I would recommend it. My most comfortable and enjoyable R2R experiences have been when I made special effort to get physically ready. For me that included a regular hiking plan at altitude that included time and distance goals. It makes a difference.

North Rim access.  First things first.  The North Rim lodging and restaurants and some Ranger Services close from October 15th to May 15th.  The North Rim is still open for day use (dawn till dusk) through November 31st unless snow closes the road before that date.  So it is possible to do R2R between Oct 15th and Nov 31st but you are dependent on the weather conditions to allow you into or out from the North Kaibab Trailhead on the North Rim.

There is no real need for route finding on R2R corridor trails. All routes are maintained and clearly marked. The descriptions here are to help you know and visualize what to expect.

Bright Angel Trail starts from Grand Canyon Village by the Kolb Studio. South Kaibab Trail starts off the Yaki Point Road. You can’t take your car there but can take the South Rim Shuttle there for free or walk the Rim Trail from Mather Point Parking Lots. North Kaibab Trailhead is just over a mile from Grand Canyon Lodge, less than 1 mile from the Campsite. The mule trail / bridle path will take you there.

This is the steepest of the two “corridor” trails from the South Rim to the river. It starts with a tight series of switchbacks  down off the Rim leveling out to Ooh Aah Point,  about a mile from the trailhead. From here you can view the middle section of the trail from Cedar Ridgeonto the east side of O’Neill Butte and the switchbacks from Skeleton Point around the east side of Natural Arch and eventually round to The Tipoff. You’ll find restrooms at Cedar Ridge and The Tipoff

At The Tipoff the South Kaibab Trail junctions with the Tonto Trail, which on another occasion can take you to Indian Garden and Bright Angel Trail for a nice and challenging horseshoe hike from the South Rim. You’ll also find an emergency phone at The Tipoff.

From The Tipoff the trail begins a convoluted mile and a half of switchbacks and traverses down to The Colorado. On the descent there is a spectacular view of the river, the Silver Bridge on Bright Angel, and the Black Bridge that you will take across to Bright Angel Campground and the North Kaibab Trail

Bright Angel benefits
from more shade than the South Kaibab , a more forgiving terrain, and 3 water supplies, (2 seasonal and 1 year-round). It is also 2.5 miles longer.

The trail starts east of Hermit’s Rest Shuttle stop near Kolb Studio and begins a long series of switchbacks, at times sweeping and at times tight. The first way-point is 1.5 Mile Resthouse. Here you’ll find water, (seasonal), an emergency phone, and a restroom. Switchbacks continue to the second way-point at 3 Mile Resthouse.

From 3 Mile Resthouse the trail descends the Redwall in a series of switchbacks known as Jacob’s Ladder before opening up and following the route of Garden Creek down to Indian Garden. Here there is a Ranger Station, campground, water and restroom, and shade provided by the sprawling Cottonwoods.

With River Runners, campers, hiking groups, mule riders, and lodgers at Phantom Ranch, the first stretch of North Kaibab can feel a bit crowded compared to the rest of the trail. However there is the opportunity to replenish water supplies, take some shade, and get some snacks from Phantom Ranch Canteen

As you exit from The Box the canyon opens up and in general keeps a gradual and easy ascent up to Cottonwood Campground. About a mile and a half short of Cottonwood is a spur trail to Ribbon Falls. If you have the energy it’s hard to resist this short diversion, adds about a mile in total to the Rim to Rim.

After leaving Phantom Ranch you’ll pass the junction with Clear Creek Trail on the right before entering The Box. This narrow, high-walled section of the trail follows Bright Angel Creek as it cuts it’s way through a gorge and provides much appreciated shade.

Cottonwood Campsite is a great place to fill up your water bottles or bladder and take a break. Much less busy than Phantom Ranch and has a number of little nooks and crannies where you can find shade and a bench to rest on. There is also restrooms and an emergency phone.

From here you have a mile and half to the next water supply at Pump House Ranger Station and the junction with the Old Bright Angel Trail (not recommended as part of R2R).

It is around a half mile to the spur trail to Roaring Springs. I’ve never been inclined to take that diversion either going north or south.

The trail is now heading up Roaring Springs Canyon and 3 mile climb to the next water source at Supai Tunnel. Much of this stretch follows a ledge traversing the Redwall before crossing the canyon by footbridge.

As you pass through Supai Tunnel the trail begins to get a bit busier with day hikers from the North Rim. From here you meet a series of switchbacks for just over a mile and a half. You’ll see the white of the Kaibab Formation getting ever closer.

How much water should I carry? I suppose the question really is how much water should I drink, but to drink it you need to carry it. It is critically important to stay to avoid dehydration and loss of electrolytes through perspiration. On my first R2R I carried 6 liters of water, (2 X 3 liter bladders), and 2 liter bottles of Gatorade. Very heavy and turned out more than I needed. I made it to the river, (down SK), on less than 3 liters and filled up at the faucet there. That got me to Cottonwood where I refilled. I topped up at Pumphouse and Supai Tunnel. Since then I’ve carried 3 liters of water, 1 liter Gatorade and a supply of electrolyte tablets. I still drink the same amount, around 12 liters, (just over 3 Gallons). Regarding how much you should drink, it is imperative to “know thyself”. Hedge on the side of too much, you might meet someone who will thank you for it.

Ideally you will have someone who is there to drop you off and pick you up. However if you are on vacation and don’t have that luxury, how do you get to your trailhead of choice? And how do you get back to your car?

The most popular options are:

So, can you hike Rim to Rim?

There was an error retrieving images from Instagram. An attempt will be remade in a few minutes.